This article was published on Ekurd Daily on 2 March 2017. 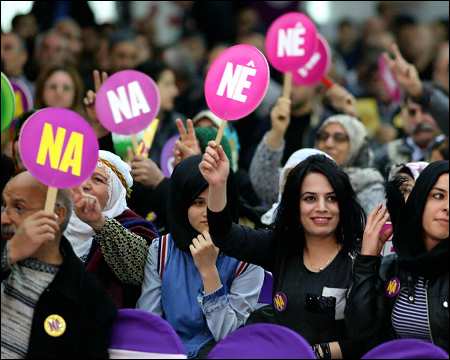 ISTANBUL,— Turkey’s pro-Kurdish party Thursday launched its campaign for a “No” vote in April’s referendum on whether to give President Recep Tayyip Erdogan more powers as its two leaders remained imprisoned.

Hundreds of people turned out for the Kurdish Peoples’ Democratic Party (HDP) event in Istanbul where the party’s spokesman described the proposal as “the greatest scourge in the history of our Republic”.

Turkey is to vote April 16 on changing the constitution to give Erdogan an executive presidency along the lines of that in France or in the United States.

“Do not lose hope, do not be intimidated,” HDP spokesman Osman Baydemir urged the audience. “Better days are within our reach if we say ‘no’.”

Simultaneously, there were events in the largest Kurdish city of Diyarbakir in Turkish Kurdistan in the southeast and the Aegean city of Izmir.

After the July 15 failed coup, the government launched a large-scale crackdown, detaining, dismissing and sacking over 100,000 people suspected of having links to coup-plotters and those accused of links to Kurdish militants.

“By imprisoning the leaders of the HDP, they are imprisoning millions of people who voted for the party at the same time,” 25-year-old activist Zeynep told AFP holding a green poster with a black “No”.

The country’s second-largest party, which held the gathering at a hotel conference hall, has been forced to hold meetings indoors due to the risk of an attack.

This stands in stark difference to the ruling Justice and Development Party’s (AKP) first rally for a “Yes” vote in front of thousands in a sports arena at the weekend.

Despite such limitations, activists told AFP they were still confident.

“The ‘No’ vote has already won, they just don’t know it yet!” Sirri Sureyya Onder, HDP MP for Ankara said to which the audience responded raucously with supportive shouts.

Turkey’s government has accused the HDP of having links to the PKK,  a charge that the HDP denies.