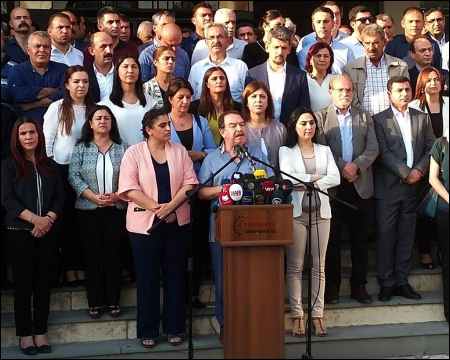 DIYARBAKIR-AMED, Turkey’s Kurdish region,— Kurdish campaigners in Turkey announced a hunger strike Wednesday to protest the lack of updates about the welfare of jailed Kurdish leader Abdullah Ocalan who has been denied visitors since summer 2015.

Around 50 politicians and activists, including MPs from the pro-Kurdish Peoples’ Democratic Party (HDP), told journalists in Diyarbakir in Turkish Kurdistan, southeastern Turkey, that they would stop eating from September 5.

Ocalan is one of the founders of the outlawed Kurdistan Workers’ Party (PKK) which resumed a three-decade-long insurgency against the Turkish state last year, following the collapse of a two-year truce.

He is serving a life sentence for treason in an island prison near Istanbul.

Since the collapse of the ceasefire, he has not been permitted visits from lawyers or supporters.

Some people shouted pro-PKK slogans during the gathering in Diyarbakir — a majority Kurdish city among the areas targeted in a military offensive last winter aimed at trying to flush the rebels out of Turkey’s southeast.

A poster of Ocalan hung over a building in the city but was later removed on the orders of the police.

Jailed Kurdish leader Abdullah Ocalan, is the founder of the Kurdistan Workers’ Party (PKK), Ocalan has a high symbolic value for most Kurds in Turkey and worldwide, according to analysts.

Ocalan had been forced from his long-time home in Syria by Turkish pressure in 1998, embarked on an odyssey through several European countries and ended up in the residence of the Greek ambassador in Nairobi. He was on his way from there to the airport on Feb 15 1999 when he was arrested by Turkish agents and put on a plane to Turkey.

Following the arrest, violent protests by Kurds erupted all over Europe. Ocalan was put on trial on the heavily guarded prison island of Imrali in the Sea of Marmara near Istanbul and sentenced to death. His sentence was later commuted to life in prison, after Turkey abolished the death penalty in 2002.

Last week, 11 police officers were killed and dozens wounded when a suicide bomber detonated an explosives-laden truck near a police building in the flashpoint Kurdish town of Cizre, about 260 kilometres (160 miles) east of Diyarbakir.

The PKK said it carried out the attack in retaliation for Ocalan’s “continued isolation” and lack of information about his welfare.

The PKK took up arms in 1984 against the Turkish state, which still denies the constitutional existence of Kurds, to push for greater autonomy for the Kurdish minority who make up around 22.5 million of the country’s 78-million population. A large Turkey’s Kurdish community openly sympathise with PKK rebels.