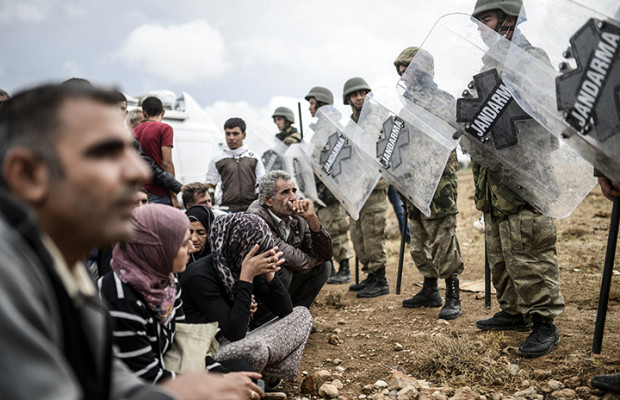 Turkish military forces of the Jandarma (police) block access at the Mursitpinar crossing gate near the Syrian border, where Syrian Kurdish people seek to pass, on Sunday. Turkey’s leader says the country is willing to fight ISIS

QAMISHLO – Turkey’s border police on Sunday opened fire on a number of Syrian civilians who were trying to cross the border illegally, escaping the ongoing war in Syria, local sources reported.

At least two young men were killed and two more wounded when the Turkish border guards opened fire on them on the border with Syria’s Kurdish region, in a bid to prevent them from crossing the border into Turkey.

Ahmed Ali, 23, and Adil Abdullah, 25, were reported dead by Turkish gun fire near the border town of Derbassiya in northeastern Syria.

The Kurdish Asayish police issued a statement, obtained by ARA News, saying the victims were trying to flee the mounting violence in Syria when the Turkish border guards shot them.

Turkey has closed all its border gates with Syria’s Kurdish region of Rojava, which forced civilians to seek alternative routes in order to cross the border looking for a safe haven. Dozens have been killed by the Turkish border guards over the past two years, mostly Syrian Kurds.