Published by The Independent 22 April 2016

Women and children are among eight Syrian refugees reportedly shot dead by Turkish border guards while trying to reach safety.

Footage obtained by The Times showed survivors of the alleged attack fleeing down a mountain path for treatment to their injuries.

One man was seen carrying his young son, who appeared to be bleeding heavily from gunshot wounds in both legs. 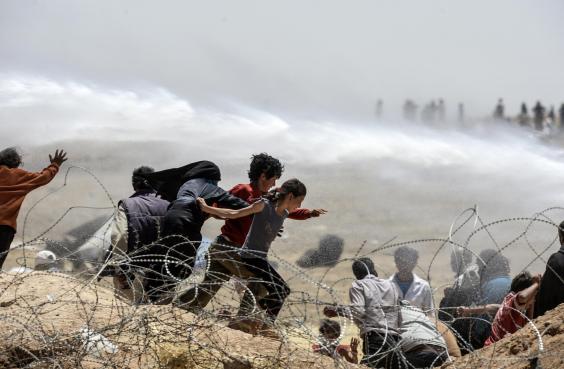 Syrian refugees run away as Turkish soldiers use water cannon to move them away from fences at the Turkish border near the Syrian town of Tal Abyad, at Akcakale in Sanliurfa province, on June 13, 2015 (BULENT KILIC/AFP/Getty Images)

Abdmunem Kashkash, a lawyer from Aleppo who was with the group but escaped injury, said they had been repelled by gunfire several times before attempting the crossing near the Syrian town of Khirbet.

“There was one little girl who was shot and we could not do more for her for four hours, until nightfall,” he told The Times. “An old man and woman are missing – they have probably been killed too.”

“The UNHCR is concerned about such reports but cannot ascertain the authenticity at this stage,” he told The Independent.

“We are seeking further information on such concerning reports and we continually advocate for broader access to safety for civilians fleeing conflict in Syria. 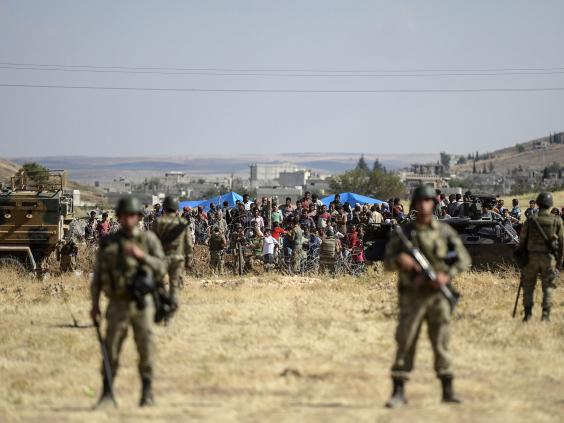 Turkish soldiers stand guard as Kurdish people wait for their relatives who wait near fences on the Syrian border on June 26, 2015 in Suruc, Turkey (AFP/Getty Images)

“We understand the complex security issues at play in managing a very long border in a volatile region, and we encourage authorities to allow civilians in need of international protection to seek safety.”

The agency said it was unable to monitor the full length of Turkey’s 500 mile-long border with Syria, which mostly backs on to conflict zones mostly controlled by Kurdish rebels, Isis and the opposition.

The alleged shooting is the latest in a series of reported attacks on Syrian refugees by border forces in Turkey, which is to receive millions of Euros as part of a deal with the EU aiming to slow boat crossings to Greece.

More than 2.7 million Syrians are already living in Turkish territory, where some of the new funding is being used to improve conditions at squalid and overcrowded refugee camps.

Families who fled the worsening violence in Aleppo last month told The Independent that Turkish police were regularly opening fire.