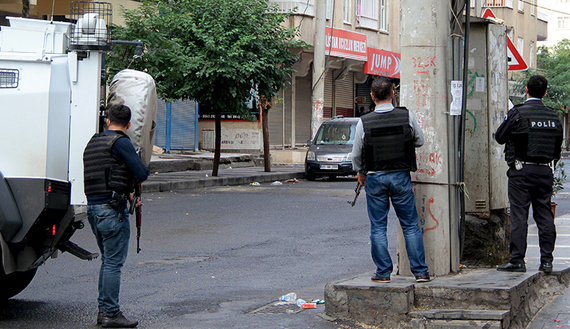 Members of Turkish police special forces take part in a security operation in Diyarbakir, Turkey, October 26, 2015. Two Turkish policemen and seven Islamic State militants were killed in a firefight after police raided more than a dozen houses in Turkey’s southeast early on Monday, security sources and government spokesman Numan Kurtulmus said on Monday. The clash took place in the Kayapinar district of the mainly Kurdish city of Diyarbakir. It was the first such shoot-out between Turkish security forces and suspected Islamic State militants in an inner city; previous confrontations have taken place on the Turkish-Syrian border. REUTERS/Sertac Kayar – RTX1T9FZ

DIYARBAKIR, Turkey — Diyarbakir was the venue of two important events linked to the Islamic State (IS) in the past 12 months.

On Oct. 26, security forces raided 17 addresses used by IS. In a clash at one of them, two police and seven IS militants were killed; many people were detained.

The Diyarbakir public prosecutor investigated both incidents. Security directorates and courts in Diyarbakir, Bingol, Gaziantep and Adiyaman generated 15,000 pages of documents, including IS archival material. These documents, examined by Al-Monitor, show heretofore unknown facets of IS, its tactics and how the state views it.

A tip to police eight days before the raids on the safe houses of IS cells led police to the richest archives of the organization ever seized. The police raided several locations after the tip was checked. In one seized computer, a 2,850-page Arabic document was found. It included statements by the leader of the organization, Abu Bakr al-Baghdadi, and scenes of executions that IS had children carry out. During the raids, police also searched the car of Nihat Turan, identified as the leader of the organization in Diyarbakir; this yielded a 384-page document that provided information about IS’ surveillance and intelligence methods.

What methods does IS use against state security forces? A document found in one of the Diyarbakir safe houses supplied police with vital information. Notes written by a militant code-named Hamza showed how militants were to collect intelligence and perform live surveillance. It said, for example, “Overt surveillance demoralizes the enemy, disrupts its work and forces it to expose itself. It is best to devise scenarios that will compel the target to expose himself. Don’t talk in cafes and other public spaces that may have listening devices.”

Militants were briefed about nonverbal signals that can be used during surveillance: “You can put on or take off your spectacles, blow your nose, put hands in pockets, take your coat off, tie shoelaces, button up your coat.” It advised militants to stay away from illuminated places at night and to be careful going past open doors and around corners. It said, “You should be able to change your appearance during surveillance.”

The documents seized from Turan’s car also have instructions on the proper use of cellular phones, the importance of secrecy, avoiding the use of real names and the need to have a list of code words. It calls for studying how security forces collect intelligence and perform technical surveillance. It warns that telephones must be switched every two months and that communications must be in code.

The organization directed the preparing of “secure rooms” where meetings can be held in full secrecy and told the militants to avoid moving around in areas covered by CCTV cameras. It said, “Be careful communicating from internet cafes. Meet at places where you cannot be trailed.”

One of the most-asked questions about IS is its human resources. How does it find so many people to join its ranks? According to the documents, police launched an investigation in Bingol, one of the provinces that provide the most recruits to IS, and detained 10 people. In the post-operation report to the prosecutor, police said a nongovernmental organization called Islah-Der (Reform Association) was set up by people linked with groups in Syria and most activities held were under its cover. Meetings were arranged under the guise of religion, and people who showed up were persuaded to join jihad and sent to Syria through illegal channels where they joined IS.

Police also studied the complaints of the families who reported missing members in 2014-15. Most of the missing were reported to have frequented the Islah-Der before they disappeared. The police report said lavish picnics were organized to attract new recruits.

After the Diyarbakir operation in which seven IS militants were killed, police sent a 78-page report to the prosecutor with detailed information and warnings about the structure of al-Qaeda and IS in Turkey. The report said the number of Turkish nationals participating in clashes and playing active roles in suicide attempts were increasing. The report found that Turkey was becoming, much like Western countries already are, a priority target for al-Qaeda, its affiliated groups and IS. The report warned that the ability of organizations in Syria to carry out attacks in Turkey should never be underestimated.

The report also said that radical Islamist groups have major influence on ongoing clashes in Syria and warned that Turkey is likely to face more difficult times as these groups intensify efforts to find recruits and arrange logistics support from Turkey. The report said there was an increase in money and personnel transfers from Turkey.

According to intelligence findings, the IS emir in Turkey is Halis Bayancuk, also known as Abu Khazanla; at one point he was detained, but then released. His father, Haci Bayancuk, was a high-level official of Hezbollah in Turkey. Halis Bayancuk is the senior official of radical structures in Diyarbakir, which operate primarily in four locations: Madrasa/Masjid, Takwa Education and Reading Hall, Tavhid Bookstore and Dar-ul Erkam Reading Room. These locations focus on converting youths who are not deeply religious and then join the organization.

A major element of information that security forces uncovered through elaborate wiretapping was IS’ transportation and logistics network. This is how the system works: Those who want to come to IS territory have to acquire a reference, known as “tazkiye,” from an emir of the organization. That emir then sends the names of the people who will come to IS customs units to arrange the border crossing. The IS sponsor emir instructs potential recruits to go to Gaziantep by plane or by bus. The customs units convey the names of those coming to border emir Ilhami Bali. This is when the transport network Bali has set up on the Gaziantep-Kilis-Raqqa axis gets into action. Jihadis contact Bali after reaching Gaziantep. They are told to take a taxi and go to a meeting point determined by the organization. At that point, the newcomers meet a liaison agent and are taken to IS guesthouses in Gaziantep and Kilis. Any personal belongings that may hinder their border crossing are taken from them and kept for safekeeping at a warehouse whose location hasn’t been found yet. Then Bali sends one of nine taxi drivers working for him to bring jihadis and their families to the second meeting point at the town of Elbeyli. Taxis are paid 40 Turkish liras per jihadi. These people are taken across the border by a smuggler named Huseyn Hano.

Police determined that women among the newcomers are taken to a women’s guesthouse under the control of Deniz Buyukcelebi, alias Abu Enes, while the men are taken to a camp at Tel Ahmar. Newcomers are allowed to bring a maximum of two suitcases per person. Belongings initially stored in Turkey are later sent to Tel Ahmar.

There are of course some who return to Turkey. A similar system is applied to arrange their crossings. Despite Turkey’s efforts, such crossings are not stopped. How do they do it? Police says border crossings are timed to coincide with the rotation time of armored vehicles on duty at the border.

Ersen Celik, alias Abu Mousa, the IS official responsible for technological affairs, provided information previously unheard of after he was apprehended in Gaziantep. Celik said IS is trying to build a hydrogen bomb and is planning to launch attacks using remote-controlled model planes in Turkey. Celik first came to Turkey in 2014 to buy model planes and left. He was arrested after his return to Turkey.

Another interesting report on IS was prepared by Adiyaman police, who said many of the people reported missing had joined radical organizations in Syria. One of them was Orhan Gonder, who carried out the attack against the HDP rally in Gaziantep. The police warned that these people could be a threat to Turkey after their return.