On Thursday, November 17th, 2016, thousands of people gathered in Brussels to raise awareness about the increasingly authoritarian policies in Turkey. The demonstrators consisted of Kurdish, Turkish, Armenian, Alevi and many other groups, but also of Belgian and international political and civil groups who came to express their solidarity. The demonstrators asked the European institutions to condemn the grave human rights violations in Turkey and ask the regime to respect democratic freedoms and principles.

On the same day the Turkish Prime Minister, on a visit in Pakistan, called on the European institutions to organize tougher crackdowns on so-called ‘terrorists’. Hate sowing comments such as this one incited Turkish extremists here in Brussels to engage in criminal activities.

On Thursday night, between 20h45 and 21h30, a caravan of about twenty cars, filled with people waving Turkish flags, arrived at the Kurdish Institute. According to eyewitnesses, they tried to break in and tried to set fire to the building. Fortunately, they didn’t succeed and the only thing damaged was the window at the front of the building. The Molotov cocktails that were intended to start a fire, exploded on the street. The attackers shouted slogans such as “Death to the Kurds!”.

The Kurdish Institute has been attacked several times in the past and was even put on fire. The attack of yesterday evening is part of an increasing climate of threat and hatred against the Kurdish community, not only in Turkey but also in Belgium. In recent weeks the Kurdish Institute in Brussels has received threats via social media and telephone, in which things were said such as ‘I hope there will be a genocide of Kurds’, and the Kurdish Institute’s website was temporarily taken offline after a series of orchestrated cyberattacks.

We ask the Belgian authorities to take urgent action. The police are in possession of testimonies and images of eyewitnesses to the attack. We ask them to take strong action against these hate mongering extremists.

Last night made it once again clear who the real terrorists and hate mongers are. We ask everyone to denounce the dramatic situation in Turkey and to emphasize the importance of human and peoples’ rights in Turkey and throughout Kurdistan!

We thank you for your solidarity. 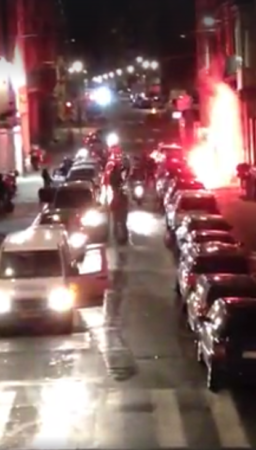