Turkish state is committing crimes against humanity in Kurdistan! – KNK

The AKP government-state, which lost its majority at 7 June 2015 general elections due to the success of pro-Kurdish Democratic Party of the People (HDP), is plunging the whole country into misfortune. After it became totally clear that it is not interested in peace and a political solution for the Kurdish question, in April the AKP government stopped peace talks with the imprisoned leader of the PKK, Abdullah Ocalan. On July 24, by starting to launch intense airstrikes against armed forces of the PKK, it officially ended the ceasefire.

But the total war strategy of AKP is not limited to this. We are faced with a kind of fascism and oppression that go well beyond the 90’s. In Dicle and Cizre (Sirnak), Nusaybin (Mardin), Lice and Sur (Diyarbakir), Yuksekova (Hakkari) and many other Kurdish districts AKP is committing war crimes and crimes against humanity in the most serious way.

In Şırnak the 24-year-old Hacı Lokman Birlik tied behind an armored police vehicle and dragged on the ground after his execution by special operation teams in the Dicle neighbourhood of Şırnak late Friday.

Birlik was first wounded in the armed attack of state forces, upon which special operation members came near him, shot him to death, and stepped on his head as they had a photo taken at the scene. Witnesses said the policemen later dragged Birlik’s body on the ground until they took it out of the street where they killed him in Dicle neighborhood. 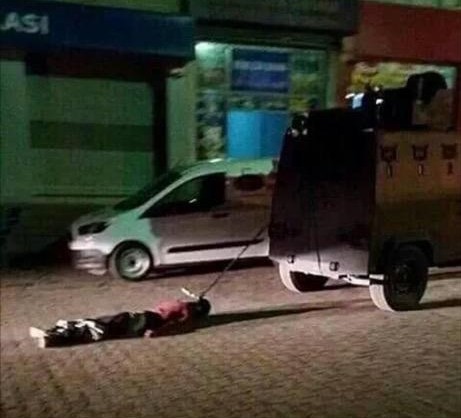 Nobody Should Forget this Photo

Peoples’ Democratic Party (HDP) Co-President Selahattin Demirtaş who also published the photo of the savagery on his Twitter account, said; “Look at this photo very clearly. It was taken in Şırnak the day before. Nobody should forget this photo, because we will not.” This image brings to mind the hundreds of war crimes committed by the Turkish state in the 1990s, when they resorted to what was later called a ‘dirty war’ against the Kurdish people to prevent Kurds from supporting the Kurdish movement.

All international authorized and responsible institutions and forces, in particular the UN to take diplomatic measures and sanctions for stopping the state terror of Turkey against Kurdish civilians

The International Criminal Court to start an investigation against the Turkish state for violating international law and law of war, consciously targeting civilians and by doing so committing crimes against humanity.

This picture, its only one of the many ten of crimes against Kurdish people in the last 2 months!