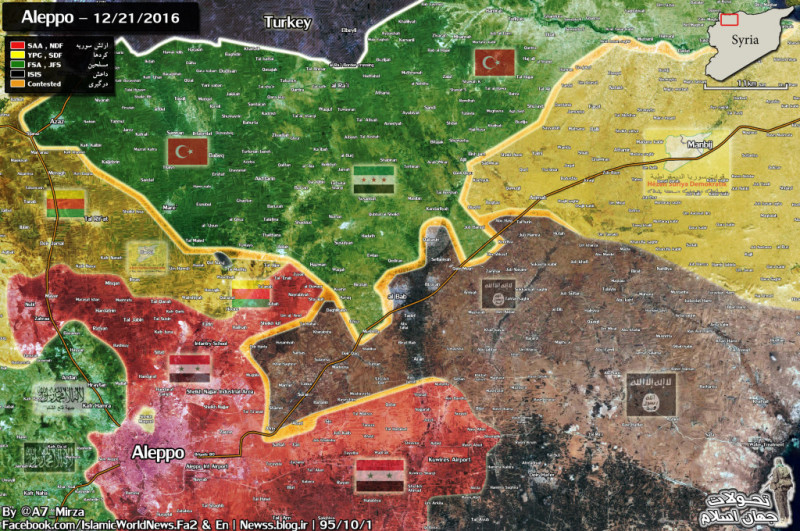 By Karen DeYoung and Missy Ryan

U.S. aircraft have begun regular aerial intelligence surveillance in support of Turkey’s offensive against the Islamic State in northwestern Syria, in anticipation of increased U.S. support for the flailing Turkish military operation around the town of al-Bab.The increased support comes after weeks of U.S. military and diplomatic talks with Turkish counterparts, and Russian airstrikes backing the Turkish offensive.U.S. support to ground troops, including airstrikes and equipment in addition to surveillance, would be similar to what the United States now provides to Syrian groups battling the militants, potentially including assistance from Special Operations advisers whose participation in the offensive has thus far been limited to an area inside the Syrian border about 10 miles north of al-Bab, according to administration and defense officials.

U.S. strikes over al-Bab would require an intensive effort to de-conflict American flights with those of Turkey and Russia, whose forces are also bombing there. “Flying anywhere in Syria is complicated. Flying up in that area where everyone seems to be flying would require some work,” one defense official said. “I wouldn’t say we aren’t worried about it.”

The officials, who spoke on the condition of anonymity, were not authorized to discuss the operations.

Decisions to increase support come as the Obama administration is also in the final stages of weighing direct weapons shipments to U.S.-backed Syrian Kurdish forces moving toward the Islamic State’s de facto capital of Raqqa.

Turkey, which considers the Kurdish People’s Protection Units, or YPG, a terrorist group allied with Turkey’s own Kurdish separatists, has warned the United States against aiding the group. Weapons shipments to the YPG, which composes the majority of what the United States calls the Syrian Democratic Forces, are now funneled indirectly through Iraq in deference to Turkish concerns.

Arming the Kurds is one of a handful of national security decisions the administration will have to make in the next two weeks on what it sees as important, ongoing operations that it fears President-elect Donald Trump will alter or discontinue.

Turkish President Recep Tayyip Erdogan said he believes U.S.-Turkish relations will “gain momentum” after Trump’s Jan. 20 inauguration. Remarks by Erdogan and Cavusoglu, to a conference of Turkish ambassadors in Ankara, were reported by the Anadolu news agency there.

U.S.-Turkey relations have been strained over both the Gulen and YPG issues, as well as Obama administration criticism of the arrests of tens of thousands of alleged Gulen supporters in the wake of the failed coup attempt.

Michael T. Flynn, Trump’s designated White House national security adviser, wrote in an op-ed published on Election Day that he believed the United States should agree to the extradition — still under consideration by the Justice Department — and should back off criticism of a key ally in the fight against the Islamic State. Obama’s policy toward Turkey, Flynn wrote, was “unwise.”

As tension between Washington and Ankara has increased, Turkey’s relations with Russia have improved. In recent weeks, Russian airstrikes came to the rescue of Turkish forces bogged down outside al-Bab. Erdogan and Russian President Vladimir Putin negotiated a partial cease-fire in Syria’s civil war — in which they have been on opposite sides for years — without U.S. participation.

It is unclear the extent to which Turkey’s new closeness with Russia — just a year after relations between them plummeted when Turkey shot down a Russian jet it said was flying over its territory — marks a long-term change in policy, or is an effort to pressure the United States over its support for the Kurds.

While pleased at Turkey’s decision last year to send its troops into Islamic State territory in Syria, the United States advised against pushing quickly southward toward al-Bab, and Turkish forces now find themselves in a difficult situation, the U.S. officials said.

U.S. reluctance to participate, they said, stemmed from the closeness of Russian air operations in and around Aleppo, and concern that the Turks were primarily interested in moving closer to Kurdish forces, provoking a clash that would complicate the ultimate goal of taking Raqqa, about 140 miles to the southeast. They also have been uncertain whether U.S. offers of support have been transmitted from Turkey’s military to its political leaders.