By Bakhtiar Amin. Published on Valdai Club on 22 January 2018. 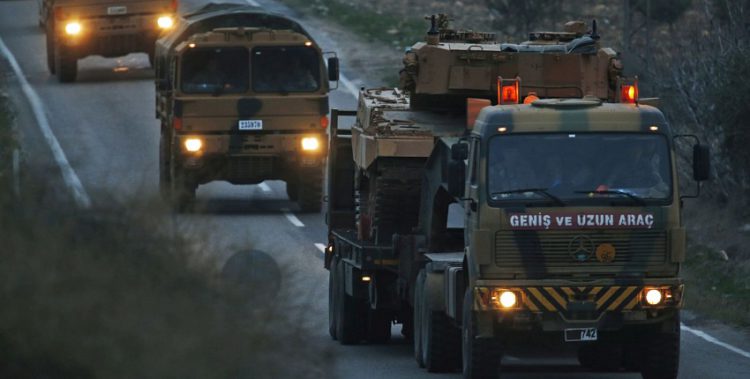 The Kurds after their setbacks in the aftermath of their independence referendum of 25th of September in 2017 in Iraq are facing another tragedy, but this time in Afrin in the western part of Kurdistan called Rojava. In reaction of a news that the United States intends to create a regular army or border guards strong of (30,000) soldiers in Syria, half of them from PYD forces to protect the border with Syria and Iraq from returning of Da’esh (ISIS) to Syria, led the Turkish troop movements.

On Sunday, January 21, the Turkish army’s land operations backed by pro-Turkish Free Syrian Army (estimated to be 25,000 soldiers declared by SFA) are participating in the operations and together control 4 Kurdish villages in Afrin and confirming that they have entered Afrin. The YPG stated that they have pushed back these forces in some districts and stopped their advancement into Afrin. Media sources are talking about Syrian government forces agreed YPG forces from “Sheikh Maqsoud” neighbourhood in Aleppo to pass through their controlled areas to Afrin. The Turkish Prime Minister announced that Turkey is aiming to create a “Security Zone” 30km depth in Afrin. Erdoğan declared that his goal is also to return back 3.5 million Syrian refugees to Syria through this operation.

All this is happening under a relative silence and acceptance of major players in Syria. Kurds believe that their friends have been “disloyal” to them, they gave a “green light” to Turkey and turned their back to Afrin and allowed the civilian population to be terrorized by Turkish bombardments. Despite non-stop bombardments of Afrin, still the Kurds are resisting. General Joseph Votel, the head of the Central Command of the US army declared that Afrin is not in the framework of their operations and is not of a great importance to them. Russia withdraw its forces from Afrin. There is a Turkish, Russian and Iranian understanding on these operations. Turkey has proven throughout the history its hostility to any Kurdish aspirations in Syria, in Turkey and elsewhere. Turkey does not want the emergence of a Kurdish federal entity on their border sympathetic or an extension to Turkish Kurds and Russia and Iran are concerned that an intensive arming of the Kurds are compatible with the new strategy of President Trump against the regime of Bashar Al Assad.

US Secretary Tillerson and Pentagon officials declared that they take into consideration the Turkish concerns and they do not support PKK. The Turkish- American relations are at its worst. There is a serious tension in relations between Turkey and several European countries such as Germany, France, Netherlands, Austria, Belgium, Sweden, Denmark, Cyprus, Greece, UK, etc. The deterioration of Turkish-Israeli relations and the antipathy between Erdoğan and Netanyahu also has additional implications on Turkey’s regional and international policies.

Diverse statements came out from Moscow; Russian Ministry of Defence considers Washington for being irresponsible in undermining the peace process in Syria in which Kurds are part of it and that US provoked Turkey by creating an army for the Kurds and armed them in violation to the unity and sovereignty of Syria which led to a violent reaction from Turkey and started its operations in Afrin.

The Kurds do not see any justification for the Turkish aggression on Afrin and the Kurds of Syria. The (PYD) officials reiterated that they had not attacked Turkey, but in contrary Turkey since more than five years has been attacking the Kurds of Syria including the localities and orchards of Afrin. The Kurdish National Council of Syria (ENKS) a rival political formation to PYD regrouping several political parties and organisations of Syria, also strongly condemned the Turkish shelling of Afrin and other Kurdish areas and asks PYD for Kurdish unity, political reforms in Rojava, and calls the international community to act urgently to stop the Turkish aggression in Afrin and protect the civilian population, who will become the victims of such an aggression.

Observers believe that PYD has made ditches and tunnels and would use the Bosnian methods of city wars as PKK did it in Diyarbakir, Cizire, and Širnax in Kurdish cities of Turkey. On the other hand, Turkey seems to have chosen the Sri Lankan way of dealing with “Tamil Tigers”, to crash utterly its Kurdish opponents of PYD in Syria and PKK in Turkey, and refuses the Spanish-Basque, or Northern Ireland or Colombia-FARC peaceful approach to solve the Kurdish problem be it in Turkey or Syria. Kurds of Syria repeatedly reiterated its intention of good neighbourly relations with Turkey and that they have suffered from historical injustices in Syria and have no plans to carry out any hostile activities against Turkish territories, but Turkey considers them more as an offspring of PKK.

The Turkish attacks are widening in its scope in targeting both the Syrian Democratic forces and the civilians in Afrin, Kobani and beyond; meanwhile, the Turkish army is massing more of its troops with its tanks, artillery and another heavy armament on border areas of Afrin. the Turkish army has been shelling and bombing by artillery, mortars, and rockets a score of Kurdish villages and districts in Afrin and even some towns of Kobani as well as the triangle area between Turkey, Syria, and Iraq in Malikiya district in recent days.

Afrin is inhabited by almost million people and it is a beautiful fertile and touristic Kurdish city, some 35-45km faraway from the Mediterranean sea, which gives it a special strategic position that makes Turkey nervous about Kurds to get one day a border with the Mediterranean sea providing the possibility of exporting Kurdish oil through the sea and might be used not only as a transport way for Syrian Kurdish oil but also Iraqi Kurdish oil and gas replacing the importance of Ceyhan pipelines. Syrians in general and the population in Afrin are fearful that their region’s demography will be changed and becomes another “Askandaruna” occupied by Turkey since 1930s.

Turks have sent (20,000) soldiers with heavy armament to the borders of Afrin from the north in addition to the Euphrates shield of (22,000) from the West composed mainly of pro-Turkish Syrian Free Army. 13 military formations among them Forces of Sultan Murad, Muhammad Al Fatih and the army of Al Nasr, etc…are ready to participate in the battle of Afrin.

The attack on Afrin is to separate Afrin from Qamishlo/Hassakah and Kobani, but also to take over the oil fields, the fertile area of Eastern Euphrates and the Tabqa Dam of strategic importance. At least half of the oil fields of Syria are located in Kurdish areas and controlled by PYD administered cantons. On another hand, Turkey tries to separate the Kurds from border cities of Northern Kurdistan (South East of Turkey) which are situated along the border with Syria from Sirnax (Shirnakh) province to Shanli Urfa populated by a Kurdish majority and looks at Afrin and these border areas as a possible logistical way for the Kurdistan Workers Party (PKK).

The coalition forces and many others do not share the Turkish opinion that Kurds of Afrin or of Syria have been a national security threat to Turkey. US armed and trained the PYD and SDF. The Kurds are the most reliable and efficient allies on the ground for the US in Syria. Lately, US expressed even more openly political support for the participation of the Kurds in Geneva meetings. Turkey used its veto against the PYD participation and accepted the ENKS delegates in both Geneva and Astana meetings. ENKS has had relatively good and accepted relations with Turkey and the Syrian Coalition of the Syrian opposition, but not without problems.

Kurds have had historically good relations with Russia and stood with Russians in many of its wars with the Ottomans. No doubt that Kurds are the weakest militarily in the equation but their long-time longing for their freedom is unbeatable, and they are very resilient despite all historical injustices, denial policies and genocides. Over 40 million Kurds in this world also have right to have a place under the sun and a corridor to live in it in peace and harmony with their neighbours. Kurds can be an element of stability and prosperity in the Middle East. Unitary states have failed. One hundred years of Sykes Picot’s forcible nation statehoods failed. Today almost the entire region is in a turmoil wasting their natural and human resources in unnecessary proxy and exhaustion wars.

Views expressed are of individual Members and Contributors, rather than the Club’s, unless explicitly stated otherwise.
X
F
E
E
D