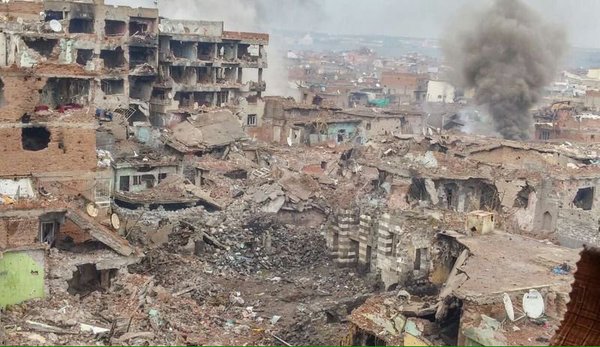 GENEVA (10 May 2016) – UN High Commissioner for Human Rights Zeid Ra’ad Al Hussein said Tuesday that he had received a succession of alarming reports about violations allegedly committed by Turkish military and security forces in south-east Turkey over the past few months, and urged the Turkish authorities to give independent investigators, including UN staff, unimpeded access to the area to verify the veracity of such reports.

“More and more information has been emerging from a variety of credible sources about the actions of security forces in the town of Cizre during the extended curfew there from mid-December until early March,” Zeid said. “And the picture that is emerging, although still sketchy, is extremely alarming.”

“I strongly condemn violence and other unlawful acts committed by the youth groups and other non-state agents, allegedly affiliated with the PKK , in Cizre and other areas, and I regret any loss of life as a result of terrorist acts wherever they have occurred,” Zeid said. “However, while Turkey has a duty to protect its population from acts of violence, it is essential that the authorities respect human rights at all times while undertaking security or counter-terrorism operations – and international law prohibiting torture, extrajudicial killings, disproportionate use of lethal force and arbitrary detention must be observed.”

The High Commissioner said he had received reports of unarmed civilians – including women and children – being deliberately shot by snipers, or by gunfire from tanks and other military vehicles.

“There also appears to have been massive, and seemingly highly disproportionate, destruction of property and key communal infrastructure – including buildings hit by mortar or shellfire, and damage inflicted on the contents of individual apartments and houses taken over by security forces,” he said. “There are also allegations of arbitrary arrests, and of torture and other forms of ill-treatment, as well as reports that in some situations ambulances and medical staff were prevented from  reaching the wounded. On top of all this, there has been huge displacement triggered by the curfews and by subsequent fighting, shelling, killings and arrests in many places in the south-east.”

“Most disturbing of all,” the High Commissioner said, “are the reports quoting witnesses and relatives in Cizre which suggest that more than 100 people were burned to death as they sheltered in three different basements that had been surrounded by security forces.”

“All these allegations, including those levelled at the groups fighting against the security forces, are extremely serious and should be thoroughly investigated, but do not appear to have been so far,” Zeid said. “The Turkish Government has not responded positively to requests by my Office and other parts of the United Nations to visit the region to collect information first-hand.”

The UN Human Rights Chief noted that more information has emerged from Cizre compared to other districts, towns and villages in the south-east – including Silopi, Nusaybin and the Sur district of Diyarbakýr, the main city in the region – which were sealed off for weeks on end, and are still next to impossible to access, because of the heavy security presence.

“In 2016, to have such a lack of information about what is happening in such a large and geographically accessible area is both extraordinary and deeply worrying,” Zeid said. “This black-out simply fuels suspicions about what has been going on. I therefore renew my call for access for UN staff and other impartial observers and investigators, including civil society organizations and journalists.”

Noting alarm bells rung by other international human rights entities in recent weeks,* Zeid called for a prompt investigation and prosecution of all those suspected of being involved in violations of the right to life, including extrajudicial killings and disproportional use of lethal force, and stressed that the judiciary should act independently from all other branches of the State, including the military and the Executive.  He also called on the Turkish authorities to allow the return of all those who have been forcibly displaced, and urged them to ensure that, in future, curfews are limited to the minimum duration necessary and with due concern for human rights obligations and humanitarian considerations.

The High Commissioner noted Turkey’s continued engagement with UN human rights bodies, including the recent visit of UN Working Group on Enforced or Involuntary Disappearances; the recent review of the country’s record by the UN Committee on the Protection of the Rights of All Migrant Workers and Members of Their Families; and the ongoing review by the UN Committee against Torture which will issue its concluding observations on Friday 13 May.**