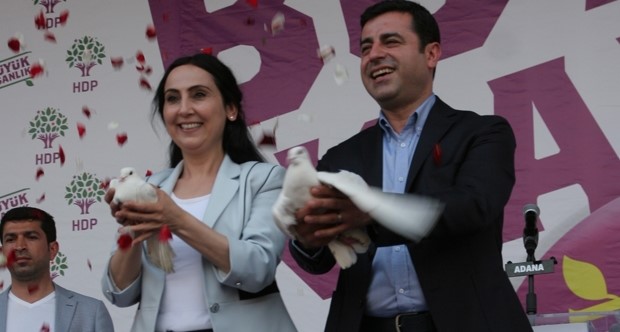 The pressures on the democratic opposition in general, and on the HDP in particular, have not ceased after the referendum on 16 April in Turkey.

Two days after the referendum, on 18 April 2017, the countrywide state of emergency rule was extended for another three months for a third time. The next day, on 19 April 2017, Ms Burcu Celik, HDP deputy for Muş, was arrested with the charges of “inciting people to hatred and enmity” and “making terrorist propaganda” due to a speech she had delivered in 2015. She is currently kept in Sincan Prison in Ankara under conditions of solitary confinement.

Ms Aydoğan had been arrested on 4 November 2016 with charges of “making terrorist propaganda” and “inciting people to hatred and enmity.” These accusations were based on her political activities, such as giving speeches or attending public and political events. Ms Aydoğan was released with the condition of judicial control. However, her parliamentary seat is at stake now because of a 4 years, 8 months and 7 days sentence given by Diyarbakır 2nd Assize Court. The appeals court in Gaziantep approved the conviction, and the prosecutor’s office in Diyarbakır has sent the formal letter to the Ministry of Justice, demanding the revocation of Ms Aydoğan’s parliamentary seat. Similar to the procedure used for the revocation of the parliamentary seat of HDP co-chair Ms Figen Yüksekdağ, Ms Aydoğan will lose her seat at the parliament when the court order is read out at the plenary.

In addition to Ms Aydoğan and Ms Beştaş, Mr Nihat Akdoğan, HDP deputy for Hakkari who was in prison since 7 November 2016, was released from prison on 26 April 2017. His multiple cases are pending. But the prosecutor objected to the decision of the court with the demand of a new arrest order. The court has not made a decision, yet.

On 25 April 2017, Ms Feleknas Uca, current HDP Deputy for Diyarbakır and former member of European Parliament for ten years, was detained while leaving her house in Diyarbakır. She was released after her testimony at the office of the Prosecutor.

After the arrest of one and release of three of our deputies, there are currently two co-chairs and nine HDP deputies in jail. In addition, more than 80 Kurdish mayors are still in prison. Our co-chairs, deputies, and co-mayors are prosecuted because of their speeches and political activities. The appeals we made to the Constitutional Court in November 2016 for the release of our co-chairs and deputies have not been reviewed, yet. And neither the European Court of Human Rights has started reviewing HDP’s applications regarding both the lifting of legislative immunities of its deputies and their arrest.