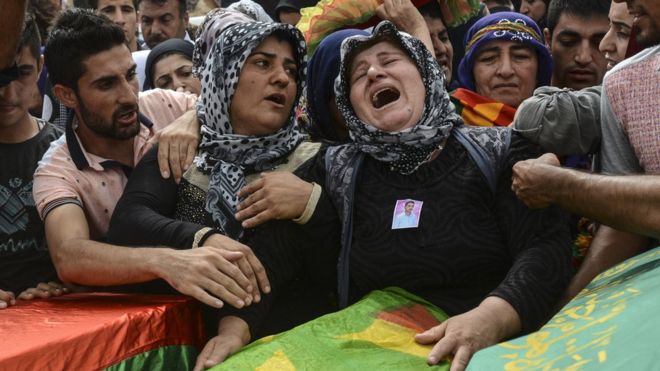 Funeral for those who died during the curfew in september 2015 in Cizre. (Getty images)

Civilian deaths in sieges imposed by the security forces

The first of these sieges, described as “curfews,” was imposed in Varto, starting on 16 August. There are sieges still in course in Cizre, Silopi and Sur districts. “Curfews” have been declared 56 times in 20 districts of 7 cities and so far these “curfews” have totaled 274 days. In some districts where curfews have been officially lifted, there is still a de facto siege. The most recent situation in 3 districts is as follows:

Until today, 149 citizens 28 of them are women, lost their lives in the sieges.

In the last one month, 68 people in total died in Cizre, Sur and Silopi.

6 people whose funerals are not permitted to be buried in Silopi:

3 people whose funerals are not permitted to be buried in Sur:

Police forces raided the Democratic Regions Party (DBP) building on the ground of a notice. After the search inside the building, they detained Zeynep Altunkaya who is a student at the Fırat University and Mehmet Şakir Karataş who is claimed to be deserter.

In Muş district Bulanık, DBP building was raided by police forces and as a result of the raid, at least 20 citizens together with co-mayor of Bulanık, vice co-mayor and DBP administers.