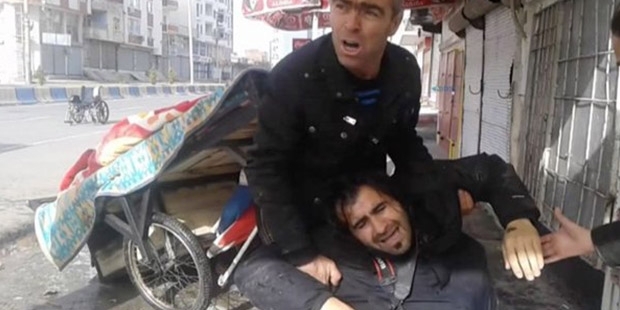 The following video dates back from the beginning of this year. We republish it as documentation of the grave human rights violations commited by Turkish forces in the Kurdish region.

The video shows Turkish forces shooting at a delegation of Kurdish politicians and other civilians who wanted to carry wounded and dead civilians out of the beseiged Cudi neighbourhood of Cizre on 20/1/16.

Warning the images are quite shocking!

“Human Rights Watch interviewed five witnesses to an incident that occurred around midday on January 20, when the security forces opened fire on a group of civilians, including local council members, municipal workers, and journalists and led by Faysal Sarıyıldız, the Şırnak member of parliament from the Peoples’ Democratic Party (HDP). The group of about 30 people carried white flags and walked from the municipal building in Şah neighborhood across one of Cizre’s main streets, Nusaybin Street, into the Cudi neighborhood to retrieve dead bodies and injured people. Sarıyıldız said the group had decided to take this action after hearing many reports that ambulances were prevented from reaching injured people or collecting the dead in Cudi:

After the district governor failed to answer my repeated calls to his mobile phone, I informed him by SMS that as a group we were going to go into the Cudi neighborhood to collect injured people and dead bodies. We carried white flags and proceeded in daylight and the security forces saw us go without preventing us. We collected several dead bodies and injured people and as we were coming back with them, we were shot at.

Selahattin Ecevit, 42, a Cizre local council member, and the acting mayor at the time, was among the group:

We went as a group of people including Faysal Sarıyıldız and council members, the deputy mayor, and some older people to retrieve the bodies and injured and put them on two hand-carts. Faysal had informed the district governor. We held white flags as we crossed the main Nusaybin Street and were clearly visible to the security forces in armored vehicles. Again we carried white flags as we crossed back again. On the return journey across the Nusaybin Road all of a sudden and without warning the security forces opened fire on us from armored vehicles in the direction of Dörtyol.

Everyone fled in all directions, some back into Cudi, some into Sur and some fell down in the street. I was hit in my left foot along with several others. Our council member, Hamit Poçal, died of his injuries and so did another man whom I didn’t know called Selman Erdoğan. Faysal managed to call the municipality ambulance for the badly injured. We managed to get to a house across the street with Faysal and others and then had to stay there for three hours. Faysal was repeatedly calling the district governor who still didn’t answer his calls.

In the end he had to get the head of the Chamber of Trade and Industry, Süleyman Çağlı, to call the district governor to convey the message. It’s disgraceful that a district governor can ignore a member of parliament’s urgent phone calls! Only hours later did we get the municipal ambulance, which we called because the state ambulance, which we’re meant to call, didn’t turn up on the grounds that it was too risky because there was a clash. The state Anatolian Agency reported the incident saying that three terrorists had been killed and nine injured in a clash. There was no clash.

The municipal ambulance came to us very late because it had picked up the badly injured and then got stopped by the police and searched.

All the bones in my left foot were smashed, I spent eight days in hospital in Batman and am still (nearly two months later) walking with difficulty.

Refik Tekin, a cameraman for the IMC TV station, was among the group and was shot in the leg but managed to continue filming the incident. The United Nations Office of the High Commissioner for Human Rights later issued a statement condemning the shooting of Tekin while expressing broader concerns about restrictions on media and developments in the southeast. Tekin said:

We went as a group with HDP Member of Parliament Faysal Sarıyıldız to fetch the dead bodies and some injured people from Cudi neighborhood. We carried a white flag. I was among the group and there was a colleague from the Dicle News Agency. We crossed Nusaybin Street, and I could see clearly that there were tanks and armored vehicles on both ends of that street.

We went into Cudi, where the bodies were. As we left the neighborhood, we took another route and again crossed Nusaybin Street, and on the road there were tanks and armored vehicles everywhere.

All of the sudden there were the sounds of gunshots. At first bullets were being fired very closely above our heads, so people started crouching and tried to get out of the line of fire, but two seconds later they started to fire salvoes at us. The shots came from the eastern end of the road [Dörtyol direction], from one side. Suddenly people started dropping to the ground. I felt a heat on my leg and I fell down and crawled. There was blood everywhere, people were on the ground. I kept filming.

An ambulance and funeral vehicles came. Both belonged to the municipality. The MP had immediately called for them, and because the municipality building was about 500 meters away they could come quickly. When the ambulances arrived on the scene, the shooting stopped. I really do not know what would have happened if those ambulances had not shown up. I think they might have killed us all right there and then. Two people were killed in the shooting. Some of the injured were put into the funeral vehicles because there were so many wounded. I was put in the ambulance with two others who were also injured.

The ambulance was stopped by the police near the deputy governor’s building. They dragged everyone out of the ambulances and started hitting them, including myself. I could see that they had also forced the ambulance driver out of the vehicle. He was standing pressed up against a wall, and policemen were hitting him, shouting abuse at him and saying: “Why did you go to that place without our permission?”

I told the police that I was with the press, and I showed them my press card, but they hit me anyway.

A policeman dragged me along the ground to the ambulance. He could see that I was hurt. The policeman shouted at me, telling me not to look at him, ordering me to close my eyes while he kept hitting me. He said: “You are all terrorists, you will see the strength of the Turks!” This struck me as an especially strange thing to say. Am I not a citizen of this country? He said unspeakable things to me, curses I do not even want to repeat. The police kicked my leg and my head. All this happened in front of the deputy governor’s building. The policeman who had hit me then ordered me to get back into the ambulance, but I couldn’t stand up. I tried to crawl, and he dragged me, and finally lost patience and shouted at the ambulance driver to put me back into the ambulance.

In front of the Cizre state hospital there were many soldiers and special operations police. There were so many that I could not even see the ground. They all took my picture with their phones, and we were kept there still in the ambulance while everyone was taking pictures of us and shouting and cursing. It felt like they gave the policemen and soldiers that time to take pictures to boost their morale, so they could show that they had “caught terrorists.” After about five or six minutes of that I was put in a wheelchair.

When they took me past the soldiers all the soldiers hit me hard on the head while I was in the wheelchair. Everyone who was able to reach me hit me. They shouted abuse at me, like: “We will finish you all off,” “You are all terrorists,” and “You will see the strength of the Turks.” This happened all the way from the ambulance to the hospital entrance.

While I was in the hospital the police started an investigation against me, for “being a member of a terrorist organisation.” Right after the events of January 20, the Anatolian News Agency announced in their report that I was a “terrorist.” I was questioned in the anti-terror branch of the Mardin police force after I was discharged from hospital, but the prosecutor in Cizre decided to drop my case. When I gave my statement in Mardin I told the prosecutor that I wanted to file two formal complaints: one against the people that opened fire on us, and another against the policemen who had hit and insulted me. So far I have not been called to make a statement in either case, and as far as I know there has not been any progress in the investigation.

The Anatolian News Agency and Hürriyet newspaper reported that three “terrorists” had been killed and nine injured in a clash with security forces, among them a TV cameraman, that a gun had been recovered from a coffin and that the municipal ambulance and funeral vehicles had attempted to get the “wounded terrorists” out of the neighborhood. A photograph purporting to show a police officer removing a pistol from a coffin was published with the news report. The news reports did not identify any source for this information or account of events.

Having interviewed five witnesses involved in the incident, Human Rights Watch believes that the news reports have no credibility and the accounts reproduced in the papers represent a deliberate attempt by authorities to cover up an incident in which the security forces opened fire, killing and injuring civilians who presented no threat and were seeking only to rescue injured people and retrieve dead bodies.

The authorities should conduct an effective investigation into the events that is capable of leading to the identification and prosecution of those among the security forces responsible for the shooting, and any criminal investigations into the actions of the group of civilians seeking to recover injured persons and retrieve dead bodies should be dropped.”