Why the Kurdish referendum is none of Turkey’s business (Asli Aydintasbas, The Washington Post) 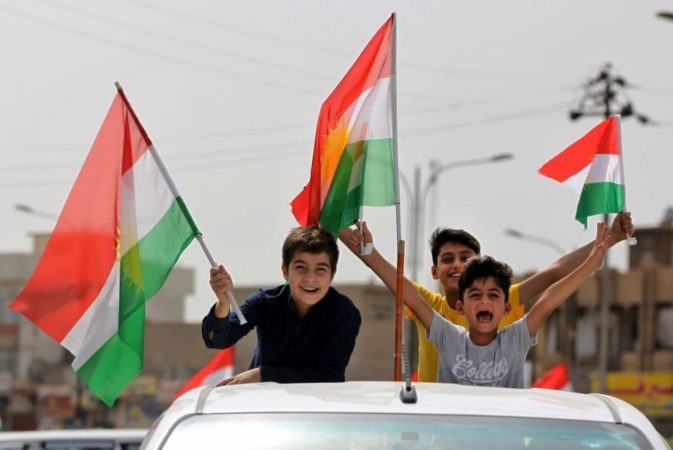 Iraqis Kurds celebrate with the Kurdish flag in the streets of the northern city of Kirkuk on Sept. 25 as they vote in a referendum on independence. (Ahmad al-Rubaye/AFP/Getty Images)

Turkish President Recep Tayyip Erdogan was angry last week with the neighboring Iraqi Kurds for holding a referendum on independence.

“Once we put our sanctions in place, you’ll be out in the cold,” he said, addressing Turkey’s neighbors to the south. “If we turn off the [crude oil] valve, it’s over. If trucks do not take stuff to northern Iraq, they won’t find food or clothing. How will then Israel send them anything? Let them send it then.”

This sounded all too similar to the rhetoric that my generation of Turks grew up with: Kurds are treacherous! Israel is trying to create chaos in Turkey and the Middle East! Everyone is trying to carve out Turkey by secretly supporting the Kurds (even though major powers, including the United States, tried hard to dissuade Iraq’s Kurdish leaders from holding the referendum). And we are angry!

Kurds were denied a state in the Sykes-Picot agreement that drew the borders of modern Levant a century ago, and they have since been fighting for different levels of recognition in their respective countries — that is, Iran, Iraq, Syria and Turkey. In Iran, Kurds established an independent state for a very brief period during the last century. In Iraq, after decades of guerrilla war against Baghdad, Kurds have been running their own affairs since the 1991 Gulf War. In Syria, Kurds have partnered with powerful Western nations to fight the Islamic State in return for administering their own region. And inside Turkey, there have been many Kurdish uprisings — one, the bloody insurgency by the Kurdistan Workers’ Party (PKK) against the state of Turkey, has been running for 33 years.

Ankara’s fury at what’s happening in Iraq stems from an existential fear that, down the road, such a move could encourage its own Kurds — roughly a fifth of Turkey’s population of more than 80 million people — for statehood. But Turkey’s knee-jerk reaction lacks proper historic context — and a smart strategy.

Turkey’s anti-Kurdish stance at home and abroad is self-defeating and makes Ankara more vulnerable than ever. It is also based on a problematic vision that defines Turkish interests in a zero-sum game against Kurdish gains. This is a dangerous proposition.

What Turkish leaders need to do is to reverse their unwinnable strategy — and start re-imagining Turkey as the multiethnic place that it really is. Instead of fighting the Kurdish reality in its neighborhood, Turkey should see the regional rise of Kurds as a potential opportunity to expand Turkey’s hinterland, as well as its economic power and influence.

First, history. Turkish officials love to describe the Iraqi Kurdish referendum as an “Israeli project” — even though Kurdish aspirations predate the establishment of Israel by half a century. Yes, Iraqi Kurds and Israelis get along, and Israelis have spoken in support of the Kurdish referendum — but Kurdish ties to Israel are no deeper than bonds with regional powers such as Turkey or Iran.

There is no doubt that Iraqi Kurds have a unique moral case for their aspirations. They suffered a genocidal campaign under Saddam Hussein and have been exercising self-rule since the Gulf War. After the fall of Hussein, it was abundantly clear that Kurds might want to opt out at some point, and negotiations for the Iraqi constitution were very tough. When a final deal was made with Baghdad in 2005, it was predicated upon Iraq’s ability to deliver economic benefits and peace. Today, Baghdad can do neither, and Kurds no longer feel bound to live under its banner.

All of this is making Turkey on edge. But who are we to tell our neighbors how to chart out their destiny? Ankara’s possible new measures against Iraqi Kurds could include closing the border — and are coupled with military threats against Syrian Kurds and hard-line policies toward Kurdish representatives in Turkey, where about a dozen have been jailed over the past year.

Turkey needs to become the patron saint of Kurds across Syria and Iraq — and not antagonize them.

Too utopian? Hardly. Until a few years ago, when Turkey was a democracy and pursued Kurd-friendly policies, its soft power extended throughout the Kurdish regions of Iraq and Syria and beyond. In 2013, Erdogan invited Iraqi Kurdish leader Masoud Barzani to Turkey’s largest Kurdish city, Diyarbakir, for a historic rally and declared, “We are building a new Turkey,” dedicated to all ethnicities and faiths. The rapprochement between Erdogan and Barzani made Iraqi Kurdistan Turkey’s closest regional ally and third-largest export market after Germany and Britain. Our foreign ministry changed its “Northern Iraq” designation to “Kurdistan Regional Government,” and Turkey started buying KRG’s oil. Meanwhile, a peace process at home with the PKK reinforced the idea of Turkey as a common homeland for Turks and Kurds, as people across the region started viewing Turkey as a model.

During that period, one senior government official eloquently explained to me the strategy: “In the long run, we will either shrink or expand — and I would rather expand with the Kurds.”

Whatever happened to all that? The biggest casualty in Turkey’s democratic backsliding over the past two years has been the dismantling of the peace process with Kurds and hence the idea of a Turkish-Kurdish homeland.

Now, Ankara’s belligerence toward the Iraqi Kurdish referendum casts one more stone against that idea. The only realistic way for Turkey to isolate itself from regional turmoil is through returning to the peace process at home and extending a hand to other Kurds across the borders. Kurds are our buffer from Middle Eastern chaos and a vehicle for reforms. Someone should remind Turkish leaders that if they return to the idea of a democratic and pluralist Turkey, they would not have to worry about their borders. A democratic Turkey would expand with Kurds of Iraq and Syria.

The alternative, a forever fight with Kurds everywhere all the time, will rattle Turkey in more ways than one and embroil Turkey deeper into the regional anarchy. Let’s not go there.