Over 400 Yazidi girls and women have escaped from the armed group calling itself the Islamic State (ISIS) in Iraq and Syria and made their way to Dohuk in northern Iraq. Some have been bought back for ransoms. Since their kidnapping last August 2014 from their homes in Shingal, Iraq, they have been sold, enslaved, raped, and forcibly married. Many, if not most, of the returning women are now pregnant by their rapists. Mass executions of men and rape of women and girls have been used as the ultimate weapons of war to terrorize the entire population of Yazidis.

In December 2014, Amnesty International released a report on the Yazidi women kidnapped by ISIS. The returning women are now in a desperate situation. They need both medical services and psychosocial therapy. They have been traumatized and brutalized. A report this week from an escaped young woman added another terror to their captivity. They were also forced to give blood for the injured ISIS fighters. Most of these women are now living under severe circumstances in tents in refugee camps or overcrowded buildings.

While the international community condemns the genocide committed against the Yazidis by the so-called Islamic State, few have come forward to offer assistance. Rudimentary clinics operated by volunteers have opened in various refugee camps in southeast Turkey and Kurdistan (northern Iraq).

However, the volunteer doctors are mostly male and do not speak Kurdish to communicate directly with the Yazidis. An interpreter is always needed. The interpreters are Yazidi men, most of whom worked previously for the U.S. Army during the Iraq war. This language barrier adds many hurdles to those who wish to help.

Diler Havend Khalaf, a Yazidi from Tel Qasap, Shingal, was in his second year in medical school in Dohuk when he and his family fled. Diler is now a medic in the Sirnak camp clinic. Twenty-seven members of his family, including his sister, were kidnapped by ISIS. Two escaped. Diler appeals for volunteer women doctors to come and help.

Can you imagine a woman telling her most intimate medical female problems to a male interpreter? And being examined by a man? Dr. Uysal states their most urgent need is for women gynecologists.

Anyone wishing to donate or help with any of these requirements may contact Dr. Amy L. Beam (email: [email protected]).

Women around the world, please share this request and ask your gynecologist to volunteer for three months. Please also forward this to medical schools and training hospitals. 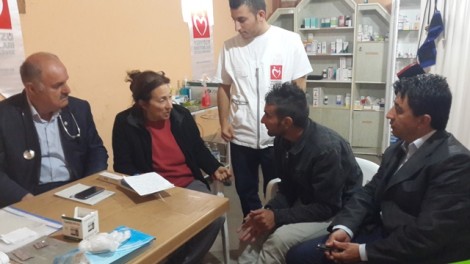 This reporter has interviewed many Yazidis who are now living in refugee camps in Turkey. Most of them have long lists of kidnapped women. Some of them are in contact with them. Their ISIS captors allow them to make occasional phone calls to their family. Many are still held in Mosul and Tel Afar in Iraq. Others have been sold to Syria and have not been heard of. In some cases, negotiations for ransom are occurring. There is hope that more women will be released for a ransom payment or can escape.

This writer met with medical Dr. Angelika Claussen in Bielefeld, Germany, to discuss the need for help from female Kurdish-speaking doctors. Dr. Claussen went to Dohuk, Iraq, where she met with a female gynecologist from Dohuk University. They are working together to create a project to help Yazidi women returning from the Islamic State (ISIS) who are in need of gynecologist and psychosocial help. They need funding and volunteers.

Dr. Claussen works with a German NGO which is an international doctor’s peace organization, IPPNW, that can accept donations. Anyone wishing to help with this project may contact Dr. Angelica Claussen (email: [email protected])

Dr. Amy L. Beam promotes tourism in eastern Turkey (North Kurdistan) and writes in support of Kurdish and Ezidi human rights. She has been reporting on Ezidis in Turkey since August 2014. Read her stories at KurdistantTribune.com. She is writing a book, “Love and Betrayal in Kurdistan.” Follow her on Twitter @amybeam or contact her at [email protected]

Please also consider donating to the Sirnak Yazidi Food Fund which she created. The Turkish government does not support the Kurdish-run camps which exist solely on donations.