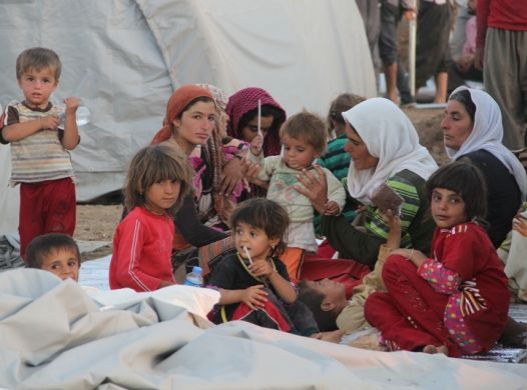 ANF – TIL KOCER 08.08.2014
West Kurdistan’s People’s Protection Units (YPG) forces have managed to form a safe corridor following a challenging fight to save tens of thousands who were stranded on Sinjar mountains after ISIS gangs attacked the city on 3 August. By means of these security corridors and using the cars allocated by the autonomous government of Rojava, YPG forces have enabled safe access for over 20 thousand people from Sinjar to Rojava in the last six days.

ISIS gangs, notorious for their brutal acts and massacres against the peoples of other beliefs, encircled the Sinjar city and its villages after the withdrawal of peshmerga forces six days ago. Tens of thousands of people found refuge on the mountains of Sinjar, and called for immediate help from across the world, Kurdish organisations in the first place.

Upon their call, YPG forces reached the people on hills after clashing with ISIS gangs from Til Kocer to Sinjar. Protecting the people from the attacks of gang groups, YPG forces started to grant them safe access to Rojava through the security corridors they formed on 4 August.

In the meantime, the Democratic Autonomous Administration, people’s assemblies and aid organizations of Rojava started to make preparations before welcoming the refugees from Sinjar. Camps have been formed and basic needs have been made avaliable yet before the arrival of Sinjar refugees.

According to the information given by President of Rojava Institution for Humanitarian Aid, Hember Hasan, over 20 thousand people have been enabled to take refuge in West Kurdistan through YPG’s security corridors in the last six days. Hasan remarked that there are still tens of thousands waiting to cross into Rojava. He noted that refugees are reaching Rojava from three points of safe crossing, and being provided with urgent needs soon after arrival.

According to Hember Hasan, some of the Yezidi refugees from Sinjar are being enabled access to their relatives they want to reach in South Kurdistan cities such as Zaxo, Dihok, Hewler and Sulaymaniyah, while over a thousand Yezidis have crossed into North Kurdistan, and thousands of others enabled to settle in the West Kurdistan cities of Amûdê, Tirbespiyê and Hesekê. On the other hand, Yezidis are hosting around 300-400 families in Amûdê and 200 others in Hesekê.

More than two thousand refugees have settled the Newroz Refugee Camp in Derik where their needs are being met by the administration of the Cizire Canton and Rojava Institution for Humanitarian Aid.

The people of Rojava have also mobilised for the refugees, trying to grant them any help possible using their own means, and collecting aid in many cities and towns.