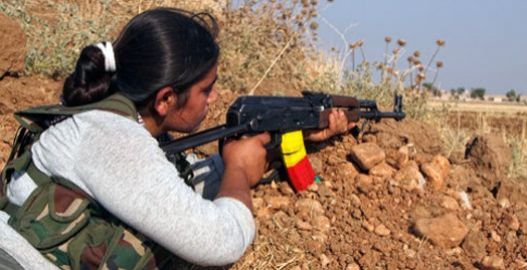 The YPG has stated that the gangs trying to enter Kobanê launched one of their most concerted attacks last night and this morning, but that their advance was halted and heavy casualties inflicted on them. In last night’s clashes 67 gang members were killed, while 6 YPG and 4 Burkan al Firat fighters also died.

A statement issued by the YPG press centre said that ISIS gangs aiming to be in Kobanê for the first day of Eid had launched one of their most concerted attacks with reinforcements and heavy weaponry. The statement said: “The advance of the gangs, who are trying to enter Kobanê town, was halted and heavy casualties inflicted,” adding that the gangs had launched 2 attacks last night around the village of Mistenûr to the south of Kobanê.

The YPG said after these two attacks were repulsed, the gangs had launched a third assault this morning. The statement continued:“In these clashes to the south of the village of Mistenûr a tank was destroyed by our forces on the Aleppo road.”

Simultaneous attacks on the western and eastern fronts

“Our forces also responded to a gang attack around the village of Helincê. The gangs attacked simultaneously on the western and eastern fronts. These attacks were repulsed. Shelling from these fronts is continuing intermittently. In clashes on these fronts as far as has been ascertained 67 gang members were killed.”

The YPG said fierce clashes were continuing on all 3 fronts, first and foremost in Mistenur, and that in last night’s clashes 6 YPG and 4 Burkan al Firat fighters had died.

Attempt to infiltrate in Serêkaniyê

The YPG stated that its forces had also repulsed an attempt by gang members to infiltrate an area near the village of Mebruka to the south west of Serêkaniyê, killing two gang members.
ANF – NEWS DESK 04.10.2014
http://en.firatajans.com/news/news/balance-sheet-of-historic-mistenur-battle.htm