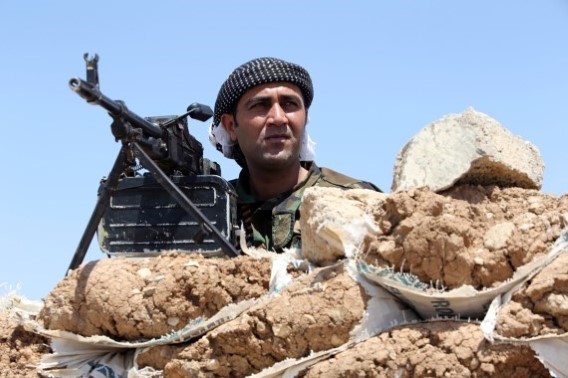 Resistance by YPG/YPJ forces continues in the Kobanê town of West Kurdistan, Rojava, which is being targeted by intensified attacks of ISIS gangs for the last 21 days. The eastern and southern fronts have last night witnessed fierce clashes and the most concerted aerial bombardment since the beginning of the attacks and resistance on 15 September.

According to the reports coming through, ISIS gangs continued to launch attacks with heavy weaponry and reinforcements along last night when YPG/YPJ fighters stiffly responded to the attacks.

Dozens of members of the gangs were reported killed in clashes last night when gangs once again concentrated their attacks on the strategically important Mistenur hill.

Giving information about last night’s clashes, President of the Kobanê Canton Enver Muslim said clashes intensified and got heavier on all three fronts.

Besides clashes in the south and east, YPG-YPJ guerrillas also carried out actions on the eastern front where an ammunition dump belonging to the gangs in the village of Siftek was destroyed and many gang members were killed in clashes.

On the other hand, aircrafts of the international coalition shelled some ISIS positions around the Kobanê town last night. Following the first bombardment on the southern front, aircrafts shelled six locations in the east and the south at midnight.

Clashes, which discontinued for some time after the shelling, re-erupted towards the morning.

YPG Press Centre is expected to issue a statement about the details of the battle today.
ANF – KOBANÊ 05.10.2014
http://en.firatajans.com/news/news/kobane-resistance-continues-1.htm