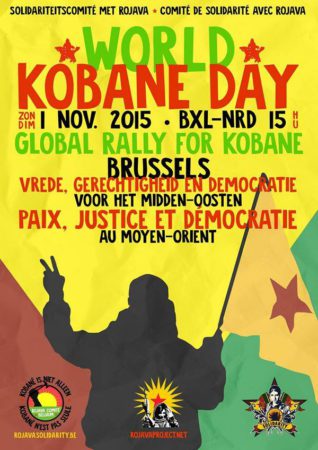 URGENT CALL FOR ACTION: Global Rally for the freedom and reconstruction of Kobane

Date for Global Rally: 1 November 2015
The determined resistance of the Kurdish men and women in this strategic border region of Rojava (Western Kurdistan in Syria) inspired people and governments all over the world when they successfully repelled the siege of their city Kobane by the Islamic State (ISIS) just over a year ago. Their fight became a symbol of popular resistance to the merciless violence and horrendous atrocities committed by ISIS.
In response, on 1 November 2014 an urgent international call for a global day of action for Kobane and for Humanity was launched appealing to people all over the world to show solidarity with Kobane and for humanitarian and material assistance.
Hundreds of individuals and organisations representing thousands of members from across the world signed this call including prominent individuals like Professor Noam Chomsky and Archbishop Desmond Tutu, who have both been long-time supporters of the Kurdish struggle for self-determination, as well as Nobel Peace Prize Laureates like Adolfo Erez Esquivel, and Jose Ramos-Horta, former President of East Timor and Nora Cortinas, cofounder of the Mothers of Plaza de Mayo in Argentina and Palestinian singer Reem Kelani.
But while there is no official support the logistics of sending aid to Kobane has been fraught with insuperable difficulties and the people of Kobane have continued to suffer with many families fleeing to a place of greater safety. That is why it is even more urgent now to set up a humanitarian corridor from Turkey to Kobane to facilitate aid to flow through to reach the city, which is still facing ISIS assaults.
Pressure therefore needs to be brought on the government of the AKP in Ankara to take immediate action to let essential medical supplies, food and clothing, to pass through to Kobane.
Despite the relentless onslaught of ISIS forces over the past months, Kobane is still standing proud and free. The people are still putting up fierce resistance and are determined to defend their self-governing administration which is one of three cantons in the Democratic Autonomous Administration of Rojava (Western Kurdistan, Syria) who are secular, democratic, non-sectarian and pro-gender equality.
The tragic truth is that the death of the young Kurdish boy, Alan Kurdi, whose body washed up on the shore of Bodrum and shocked the world, need never have happened if the people of Kobane had received proper assistance from the international agencies a year ago.
Now is the time to aid Kobane and by so doing show solidarity with the forces who are struggling for a free, democratic and peaceful Syria.

Now is the time for the world to recognize that democratic autonomy in Rojava and the “Rojava Model” promises a free future for all peoples in Syria.

It is time to talk peace and to act for peace. Supporting Kobane is to support peace.
We encourage people all over the world to show their solidarity with Kobanê.
Go to the streets and demonstrate on 1 November 2015.
We urge you to join the Global Rally for Kobanê
Support the Resistance against ISIS – for Kobanê – for Humanity!