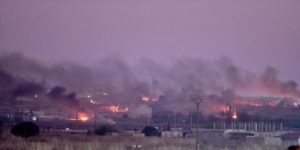 Syria: Damning evidence of war crimes and other violations by Turkish forces and their allies

Turkish military forces and a coalition of Turkey-backed Syrian armed groups have displayed a shameful disregard for civilian life, carrying out serious violations and war crimes, including summary killings and unlawful attacks that have killed and injured civilians, during the offensive into northeast Syria, said Amnesty International today.

The organization gathered witness testimony between 12 and 16 October from 17 people including medical and rescue workers, displaced civilians, journalists, local and international humanitarian workers, as well as analyzing and verifying video footage and reviewing medical reports and other documentation.

The information gathered provides damning evidence of indiscriminate attacks in residential areas, including attacks on a home, a bakery and a school, carried out by Turkey and allied Syrian armed groups. It also reveals gruesome details of a summary killing in cold blood of a prominent Syrian-Kurdish female politician, Hevrin Khalaf, by members of Ahrar Al-Sharqiya, part of the Syrian National Army, a coalition of Syrian armed groups equipped and supported by Turkey.

“The Turkish military offensive into northeast Syria has wreaked havoc on the lives of Syrian civilians who once again have been forced to flee their homes and are living in constant fear of indiscriminate bombardment, abductions and summary killings. Turkish military forces and their allies have displayed an utterly callous disregard for civilian lives, launching unlawful deadly attacks in residential areas that have killed and injured civilians,” said Kumi Naidoo, Secretary General of Amnesty International.

Turkish military forces and their allies have displayed an utterly callous disregard for civilian lives, launching unlawful deadly attacks in residential areas that have killed and injured civilians

“Turkey is responsible for the actions of the Syrian armed groups it supports, arms and directs. So far, Turkey has given these armed groups free rein to commit serious violations in Afrin and elsewhere. We call on Turkey again to end violations, hold perpetrators accountable, and protect civilians living under their control. Turkey cannot evade responsibility by outsourcing war crimes to armed groups.”

The Kurdish-led administration’s health authority in northeast Syria said on 17 October that at least 218 civilians have been killed in Syria, including 18 children, since the offensive began.

According to the Turkish authorities, 18 civilians have died and 150 have been injured in Turkey up to 15 October, as a result of mortar attacks they attribute to Kurdish forces in Syria. If Kurdish forces are firing imprecise explosive weapons into civilian areas in Turkey this would violate international humanitarian law. They should stop such unlawful attacks immediately.

Attacks on civilians in northeast Syria

In one of the most horrific attacks documented, a Kurdish Red Crescent worker described how he pulled bodies from the wreckage of a Turkish air strike on 12 October at around 7am, in which two munitions landed near to a school in Salhiye, where civilians displaced by the fighting had sought shelter.

“Everything happened so fast. In total, there were six injured and four killed, including two children. I couldn’t tell if they were boys or girls because their corpses were black. They looked like charcoal. The other two people killed were older men, they looked older than 50. Honestly, I am still in shock,” he said, adding that the nearest frontline was more than 1km away and that there no fighters or military objectives in the vicinity at the time of the attack.

Another Kurdish Red Crescent worker described to Amnesty International his attempts to rescue an 11-year-old boy and an eight-year-old girl who were injured when mortars landed as they played outside their home near al-Salah mosque in Qamishli. He said that Qamishli had come under heavy indiscriminate attack since 10 October and residential homes, a bakery and restaurant had been struck.

“The boy was injured in his chest. The injury was horrible. He had an open wound… and he couldn’t breathe. It looked like a [piece of] shrapnel ripped his chest open,” the Kurdish Red Crescent worker said.

The boy later died of his wounds. His sister was also struck by shrapnel in the attack and doctors were forced to amputate part of her leg below the knee. The rescue worker said there were no military bases or checkpoints anywhere in the vicinity.

In a separate incident on 13 October, according to independent international monitors, a Turkish air strike on a market struck a civilian convoy that included several journalists travelling between Qamishli and Ras al-Ain. According the Kurdish Red Crescent six civilians, including one journalist, were killed in the incident and 59 people were injured. A journalist who was present on the scene and witnessed the attack described it as “an absolute massacre”. He said the convoy was made up of around 400 civilian vehicles and that there were no fighters present, only a handful of armed guards protecting the convoy.

“All parties to the conflict must respect international humanitarian law, which requires that all feasible precautions are taken to avoid, or at least, minimize civilian harm. Striking a civilian convoy is inexcusable,” said Kumi Naidoo.

“There is also no justification for indiscriminately shelling civilian areas using imprecise weapons such as mortars. Such unlawful attacks must be investigated and those responsible held to account.”

All parties to the conflict must respect international humanitarian law, which requires that all feasible precautions are taken to avoid, or at least, minimize civilian harm.

The USA is the largest exporter of weapons to Turkey. Other suppliers include Italy, Germany, Brazil and India. Amnesty International is calling on states to immediately suspend arms transfers to Turkey and other parties to the conflict in Syria, including Kurdish forces, against whom there are credible allegations of serious violations of international law, of weapons that could be used to commit or facilitate human rights violations.

Amnesty International also corroborated witness testimony, verified video footage and reviewed a medical report to shed light on how Hevrin Khalaf, a Kurdish female politician and Secretary General of the Future Syria political party, was ambushed on 12 October on the international highway linking Raqqa to Qamishli. She was dragged out of her car, beaten and shot dead in cold blood by fighters from Ahrar al-Sharqiya. They also summarily killed her bodyguard.

On the same day and location Ahrar al-Sharqiya fighters also captured and then killed at least two Kurdish fighters. They also abducted  two civilian men, both of whom work with a local medical organization and were transporting medicine at the time they were captured. Family members confirmed to Amnesty International that their whereabouts remained unknown. Amnesty International verified the time and date of the videos showing that the summary killings and abduction of the two civilians carried out on the afternoon on 12 October.

Hervin Khalaf’s close friend told Amnesty International that when she tried to call Hevrin’s phone, a man who identified himself as a Syrian armed opposition fighter answered. In Arabic, he told her: “You Kurds are traitors, all of you in the [PKK] party are operatives” and informed her that Hevrin had been killed.

A medical report seen by Amnesty International lists a series of injuries inflicted on Hevrin Khalaf, including multiple gunshot wounds to the head, face and back as well as fractures to her legs, face and skull, detachment of skin from her skull and loss of hair as a result of being dragged by the hair.

“Killing defenseless people in cold blood is utterly reprehensible and a blatant war crime. Ahrar’s al-Sharqiya’s murder of Hevrin Khalaf and others must be independently investigated and the perpetrators brought to justice. Turkey has a responsibility to stop war crimes and violations committed by forces under its control. Unless Turkey reins in its proxy forces and ends impunity for violations, it will encourage further atrocities,” said Kumi Naidoo.

Local and international aid workers told Amnesty International that the US withdrawal from northeast Syria, Turkey’s military offensive and the Syrian government joining the fray was a combination of worst-case scenarios happening all at once.

There are real fears about whether the 100,000 displaced are getting enough food, clean water and medical supplies – and how those in need will continue to receive assistance in the longer term. In camps for the internally displaced, such as al-Hol, the population is entirely dependent on humanitarian aid. A group of 14 international humanitarian organizations warned on 10 October that the offensive could lead to cutting off aid to the population, while the ICRC warned a few days later that hostilities could lead to the displacement of 300,000 people, with serious concerns about water shortages.

Many of those displaced have nowhere to go and are sleeping out in the open, in gardens and in the streets. Some have sought shelter in schools.

In the town of Derbassiya, around 90% of the population are people who were displaced from their homes and moved there. One man in Derbassiya, who fled with his family, told Amnesty International that around half were staying with relatives in the south and the rest had sought shelter in schools and mosques.

“There are no humanitarian organizations in south Derbassiye. We didn’t see anything from them. We need basic supplies like water, food, clothes, blankets and mattresses. We need a medical clinic… Winter is on its way. We need a solution especially for the families who are living outside in the open,” he said.

A humanitarian aid worker told Amnesty International: “People already suffering from chronic diseases will be at huge risk. Their survival will depend on how long this fighting lasts, and whether we are able to operate going forward.”

All parties to the conflict including Turkey, armed groups allied to Turkey, as well as Syrian government and Kurdish forces must provide unfettered access to local and international humanitarian organizations

Many expressed serious concerns that the security situation would lead to further evacuation of international staff and that the advance of Syrian government forces could pose risks to local Arab and Kurdish staff, as well as to displaced civilians who fled other parts of Syria. There are also fears that the ability of aid agencies to carry out crucial cross-border operations to deliver aid would be limited.

“All parties to the conflict including Turkey, armed groups allied to Turkey, as well as Syrian government and Kurdish forces must provide unfettered access to local and international humanitarian organizations,” said Kumi Naidoo.

“Turkey’s continued military offensive has driven thousands of already displaced people from what had been places of safe shelter. Turkey’s actions risk hampering the delivery of life-saving assistance and medical aid to those in need, causing a full-blown humanitarian catastrophe in a country already ravaged by war.”