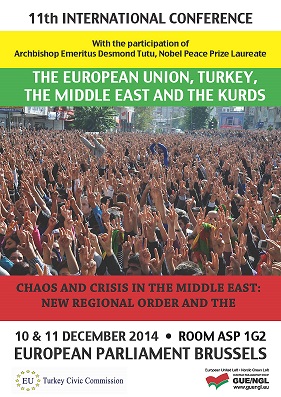 11TH INTERNATIONAL CONFERENCE ON “THE EUROPEAN UNION, TURKEY, THE MIDDLE EAST AND THE KURDS”

“HOW TO PARTICIPATE AND ENTER THE EUROPEAN PARLIAMENT”

An official “European Parliament personal badge / pass” will be provided to those participants already registered for the Conference.

Your “personal badge / pass” will be available at the main entrance of the European Parliament (Place de Luxembourg – main European Parliament’s building “Altiero Spinelli” – just after the sliding doors you’ll find a conference desk), during AND ONLY the following date / hours.

Please note that all participants must take care of their own “EP badge / pass” during both days; if someone lose the “pass / badge” it will be impossible for the conference’s organizers to replace it.
IMPORTANT INFORMATION ON CONFERENCE WEBSTREAMING

All Conference’s sessions will be webstreamed.
These are the links which must be used to follow the Conference:

Strengthen the Turkish-Kurdish Peace Process:
A New Chance for Turkey and the Region

• The Role of Abdullah Ocalan in the Peace Process
MP Pervin BULDAN, Group-spokeswoman of HDP in the Turkish Parliament, Turkey

What are the Alternatives to the Chaos in the Middle East?
Security, Stability and Welfare in the Region

• Possible Contributions of the EU for Peace, Stability and Security in the Middle East
Fréderike GEERDINK, Journalist, The Netherlands

• The EU Policy in the Middle East and Kurdistan
MEP Bodil CEBALLOS, Greens/European Free Alliance Group in the E.P.

Responsibilities for Resolving the Crisis in the Middle East

• Kurdish Contribution to a New Democratic Turkey based on Unity of Diversities
MP Selahattin DEMIRTAS, Co-President of HDP, Turkey

Questions and discussion with moderators & discussants