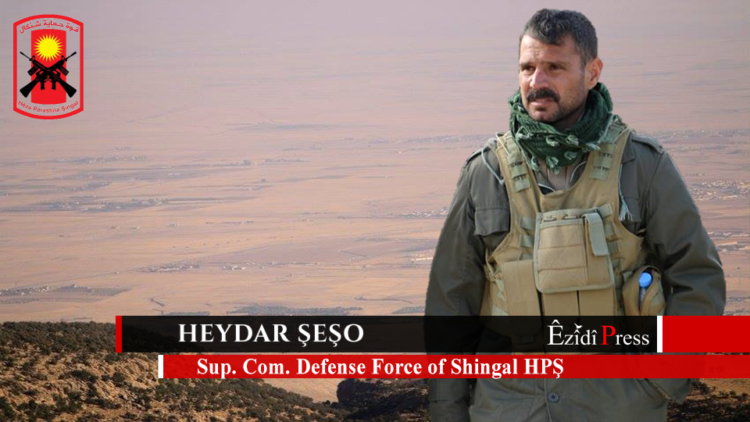 The Supreme Commander of Shingal´s Protection Unit (HPS) Haydar Shesho has been arrested and taken away by Kurdish security forces in northern Iraq a few hours ago. At about 21 o’clock local time security forces close to the Kurdistan Democratic Party (KDP) stormed his home in Khanke and arrested him together with other resistance fighters as well as his bodyguards. Shesho holds German citzenship.

More information are currently not available, the arrested persons´ whereabout is also unknown.

Shesho commands over 3,000 Ezidi resistance fighters in Shingal who have been treated with hostility because of their independence from the Kurdistan Democratic Party. It is assumed that the arrest correlates with an interview that Shesho gave KurdSat a few days ago. Shesho criticized the Kurdish government´s approach to dealing with Ezidis and accused it of being responsible for the Shingal crisis. EzidiPress coresspondents confirmed his arrest.

Dozens of Ezidi demonstrators and activists have been arrested in recent days, some even received death threats and fled the country.

The Kurdish government accuses Haydar Shesho of setting up an “illegitimate militia” (Shia militia), which is nothing else than a pretext. Fact is that Shia militias were not even deployed in Shingal. The HPS involvement in PMU (Popular Mobilization Units initiated by Baghdad) was a legal procedure that allowed the Iraqi government to arm the HPS without facing any juridical problems.

There is no legal foundation for the Kurdish government´s behavior since Shingal is not part of its territory or area of responsibility. According to the Iraqi constitution, Shingal region is part of Baghdad´s responsibility area. And the HPS did not operate in KRG territory. Shesho has therefore not breaken any laws. His arrest is politically motivated.

From the beginning of ISIS´ invasion, Shesho refused to show deference to the ruling KDP that has lost Ezidis´ trust as its Peshmerga troops fled the region. The KDP tries to regain its power in that area by silencing its political opponents, including Ezidi demonstrators and activists that have been recently arrested by KDP security forces for rallying for international protection or waving the Ezidi resistance flag.